What is the status of the project for a European cloud, Gaia-X? Does the initiative now go beyond a political think tank, and what do participating entrepreneurs think of the project? To what extent are their concerns and needs being addressed within the existing framework? Gaia-X could become a gold standard for international data relations – but at the same time does not seem to be able to really take off.

The two poles between vision and reality were recently discussed by the German-American roundtable Transatlantic AI eXchange in its January 25, 2022 issue. The initiative’s sometimes controversial international partnerships in particular were a topic, but also the question of how realistic a concrete implementation and excellent results out of Gaia-X currently are.

Technical solutions for a political problem

The central question was whether it was (or was not) already too late to establish a public cloud in Europe, and the head of the AI task force anchored in the Ministry of Economics outlined the core concerns of the Gaia-X project to the panel. Marco-Alexander Breit has been close to the initiative since its bilateral French-German birth, and he formulated the goal as “providing technical solutions to a political problem, namely to establish data sovereignty and the secure availability of data for Europe.” Gaia-X is a business-driven, not-for-profit organization anchored in Brussels that also benefits SMEs in Europe in particular.

So much for the vision. Consequently, the goal is not a race with the hyperscalers in the U.S. and Asia, he said, but to establish a set of rules for global data relationships. Trust and accessibility are fundamental to participating in data spaces. According to Breit, Gaia-X is foundational work for the next two to three decades, but a unified set of rules has yet to be established. 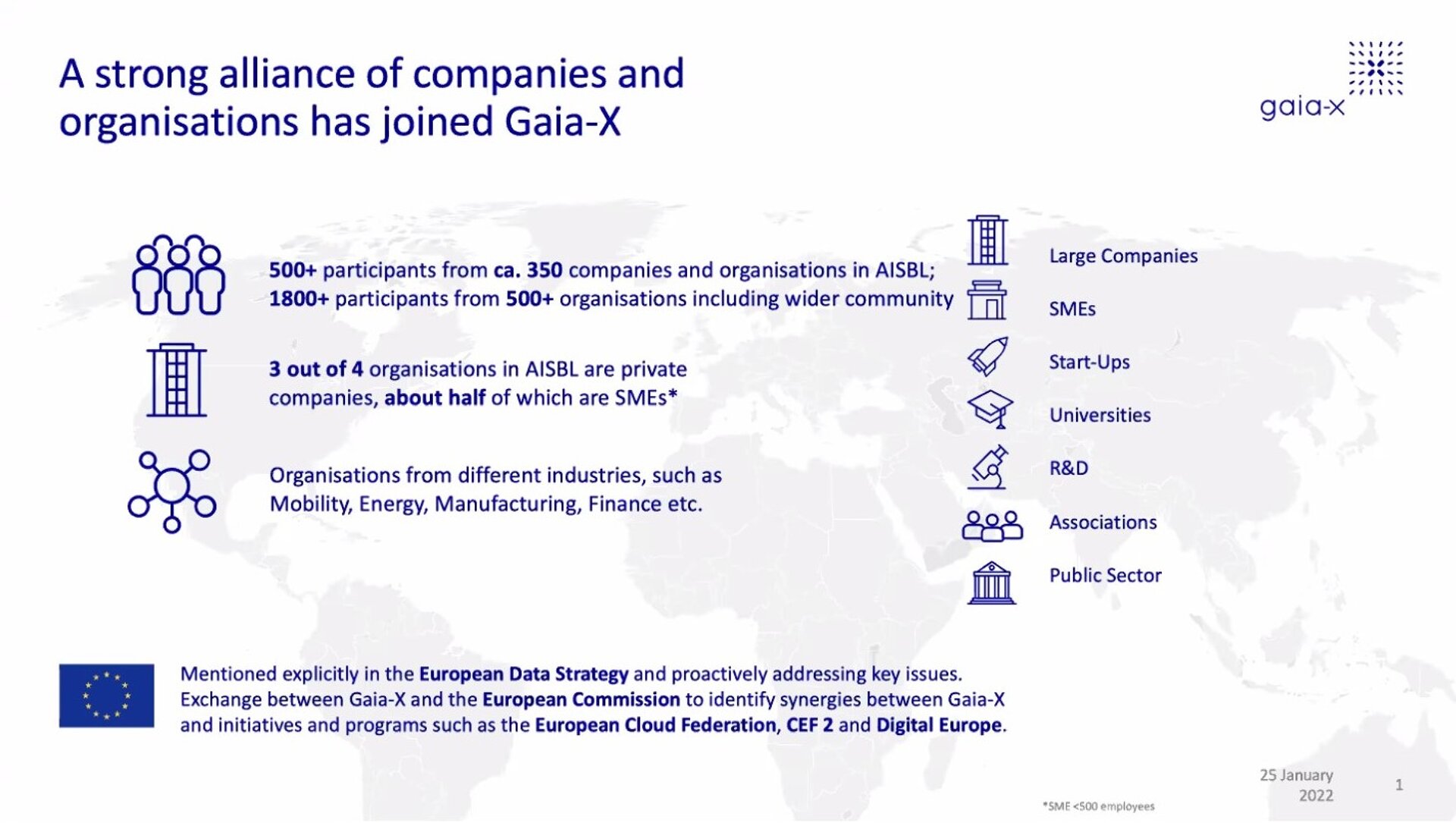 Entrepreneurs have mixed feelings about Gaia-X

The panel, which was predominantly made up of entrepreneurs, signaled great agreement with the goals and concerns of the project, but took a partly critical stance on the time horizon and the strong focus on the regulatory side. On the one hand, standards are urgently needed in a commercial environment, said Robin Röhm, who heads the tech company Apheris. His company offers organizations a platform for secure and privacy-preserving collaboration on sensitive as well as decentralized data and artificial intelligence. Gaia-X, in his view, is sometimes the right platform, sometimes not. According to its CEO, Apheris is an industrial-agnostic platform whose customers are primarily in the pharmaceutical, healthcare, and manufacturing industries. Because of the numerous stakeholders and many interests, he and his startup have apparently found it rather difficult to capitalize on Gaia-X so far. If the planned ecosystem grows as large as the vision, and if its usability will by then be intuitive, it will open up economic opportunities. However, he feels that the initiative has been too slow so far. He would like to see a stronger focus and more targeted use of resources, as entrepreneurs also need to get their projects onto the tarmac and off the ground in a timely manner.

Jonas Andrulis, whose machine learning company Aleph Alpha is considered a pioneer in Europe and who contributes the basic AI models to OpenGPT-X, took a similar tack. World-class scalable technology and unicorns only emerge on the offensive, he said. The primary goal is to create something technically unique. Gaia-X will be successful, he said, if it gives stakeholders the opportunity to act and actively shape the future. According to him, the new, very large world models in AI (Foundational Models in a term coined by Stanford researchers) will shape our future – and Europe needs its own expertise here to make a difference. For Andrulis, European sovereignty in technology is essential in this regard. “In Germany, we have a culture of risk avoidance,” the entrepreneur notes. Courage is hardly rewarded in the social context, he adds. He is currently recruiting employees from the U.S. to Heidelberg, some of whom have only emigrated because they lack courageous, exciting projects in their home country.

Dr. Markus Leberecht, who represented the voice of technology providers on the panel for Intel Germany and whose employer has been a member of Gaia-X since its inception, particularly wanted more input from the infrastructure side, meaning more participation from technical universities. “Some of these technologies are so fresh that academic input is essential in this. But it is definitely given by corresponding academic members in Gaia-X and in concrete data room implementations,” he said, concretizing his ideas. He urged that Gaia-X must be more than a think tank. What counts, he said, is output and concrete implementation. He sees the biggest challenge in achieving tangible results in a short time. According to him, Gaia-X is partly breaking new ground in the federation of the infrastructure as well as in the data rooms. Functions that are more likely to still come from the bleeding edge would have to be integrated on a large scale. “My naive hope is data sovereignty, based on data privacy,” he said, summing up his vision for Gaia-X.

The event format, founded by Thomas Neubert (Intel USA) and AI.Hamburg, aims to build a transatlantic bridge between the U.S. and Germany for closer partnerships and exchange between companies, investors and research institutions in the field of artificial intelligence. Transatlantic proposals for topics on the human machine economy for future webinars, events and conferences are welcome.

Highlights from the Task Force Artificial Intelligence and Digital Technologies are available from the Ministry of Economic Affairs and Climate Action. The ministry also provides further information on Gaia-X and the user side of the ecosystem. Those interested in participating in Gaia-X can check out the initiative’s website.

All panelists are linked through the event website. Those interested in linking to the Transatlantic AI eXchange or simply staying up to date on future events can follow the organizers on Linked-in.

Marco-Alexander Breit highlighted that investment from private vendor companies is critical to an innovative ecosystem for startups and scale-ups. For example, he said, it is relatively difficult in Europe to obtain venture capital from family-offices at the required level, but this is crucial for the offensive play. He described regulation as a defensive line: companies need a framework within which they can operate freely, but regulation should not cut them off either. On the offensive line, innovation is needed, and Gaia-X is part of that “innovation puzzle.” Breit associates Gaia-X with four goals, two of which he already sees as realized: The shift from political initiative to entrepreneurial ownership had been successful, he said, and enterprise-driven governance of the Gaia-X project was an important goal. By the end of 2022, the companies involved in the initiative should also be getting something out of it economically, so that Gaia-X could be considered a success. If, in five years, most of the data relationships and data availability had been secured by Gaia-X, a milestone would have been reached. Gaia-X should become the gold standard for data relationships in the long term, he said, so that companies like Aleph Alpha can thrive. 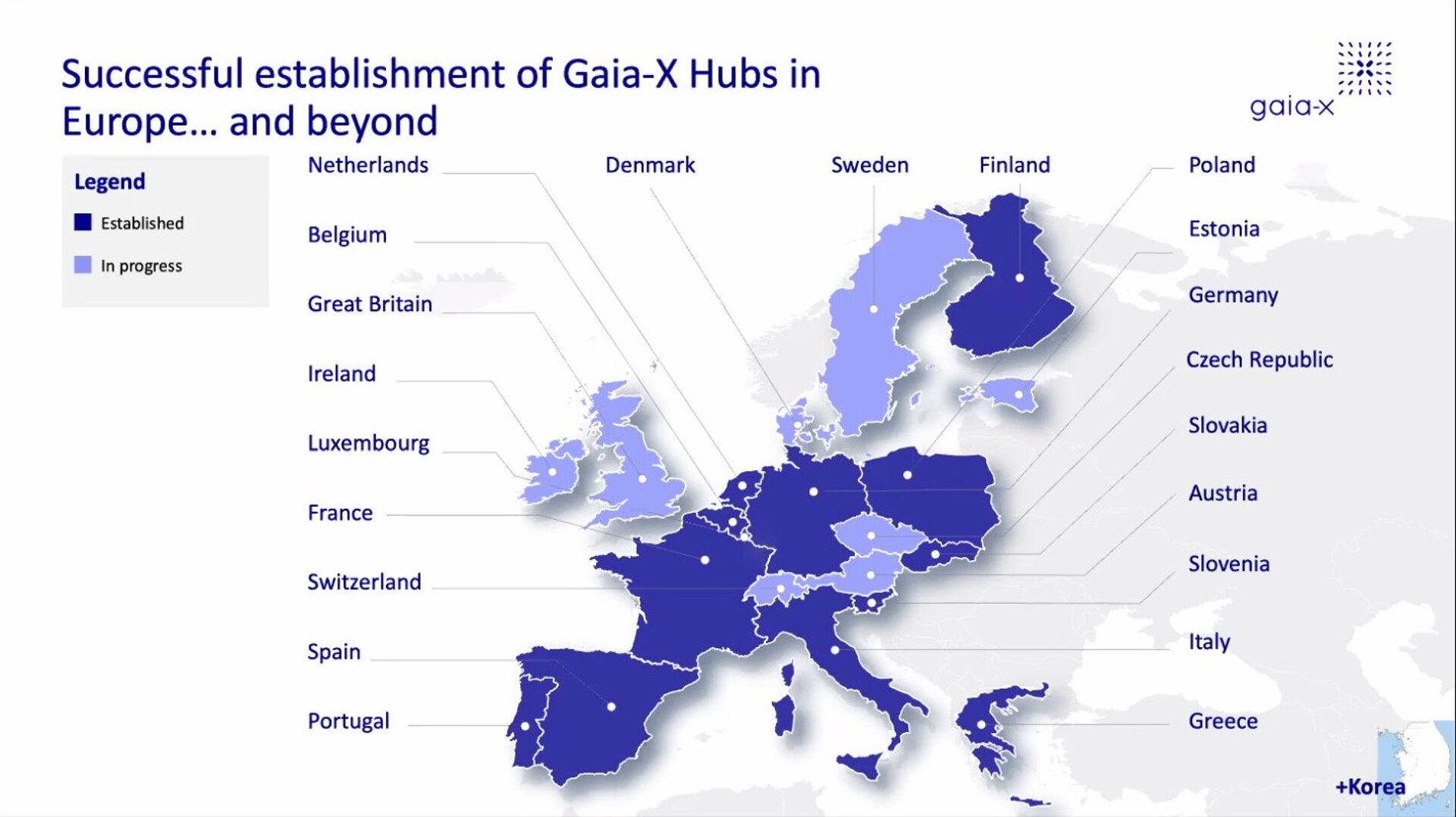 Existing national hubs in the Gaia-X project: Europe and beyond – South Korea is also represented (Fig. 3). (Image: from online discussion).

Meanwhile, international partners are increasingly cooperating in Gaia-X in hubs (see Fig. 3). At the national level, intermediaries coordinate these collaborations, and alternatively, individual partnerships exist with companies whose countries do not form a hub. Interestingly, South Korea is now involved as a country hub, while the USA is not cooperating as a whole, but companies such as Microsoft, Google, Intel and Amazon are represented as partners in the project. According to Breit, Japan is interested in principle, and talks are also underway with other potential partners. Peter Kraemer of the acatech – National Academy of Science and Engineering (Deutsche Akademie für Technikwissenschaften) is coordinating the national Gaia-X hub for Germany, and he answered in-depth questions for Heise after the panel. Kraemer has been in charge for two and a half years, and describes his core task as networking stakeholders. ???

Federated structures are necessary at the think-tank level, he says, because industry, the innovation landscape, legislation, language and culture vary from country to country in the EU. The country-specific hubs represent communities that keep users in mind and communicate into their respective ecosystems to make Gaia-X visible and better known. The country hubs serve for internal and external communication. This cannot be expected from a centrally managed structure, he says, because in Germany, for example, many different players from the private sector, the research landscape and political levels from the federal government to municipal structures are involved. For Kraemer, too, the key question is how Gaia-X can be fruitful to develop business models and create added value.

According to him, the goal of Gaia-X is an application-agnostic technology to create win-win situations for users and providers in the data economy. The data economy does not stop at the EU’s external border, so the overarching vision is to win over non-European partners for common frameworks and standards for sovereign, transparent and secure data exchange. A communication offensive is planned for 2022 that will focus on the application side and whose goal is – to put it bluntly – “to explain to the mechanical engineer in East Westphalia-Lippe what Gaia-X actually does for him.”

According to Kraemer, a culmination of all Gaia-X efforts over the past two and a half years is coming soon: In April 2022, the first lines of code of the Federation Services are to be published, and from then on, all interested parties will be able to try out “the operating system” of Gaia-X. Ultimately, it will then be up to the players the initiative links to figure out what to do with Gaia-X, Kraemer said. Its existence will not absolve companies of the responsibility to undertake developments in their own ecosystem, he added.

It’s possible that the live launch of the Federation Services will give the initiative the momentum it needs to take off soon. Overall, a mixed sentiment had emerged from the panelists at the Transatlantic Conversation: They clearly agree with the mission and concerns of Gaia-X. However, there still seems to be a certain gap between the vision and the reality experienced by entrepreneurs. 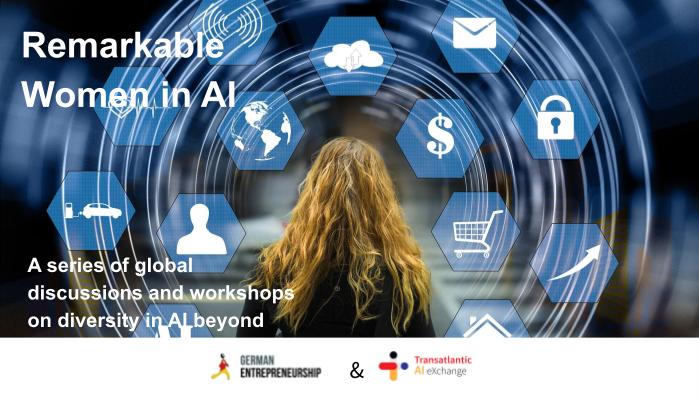 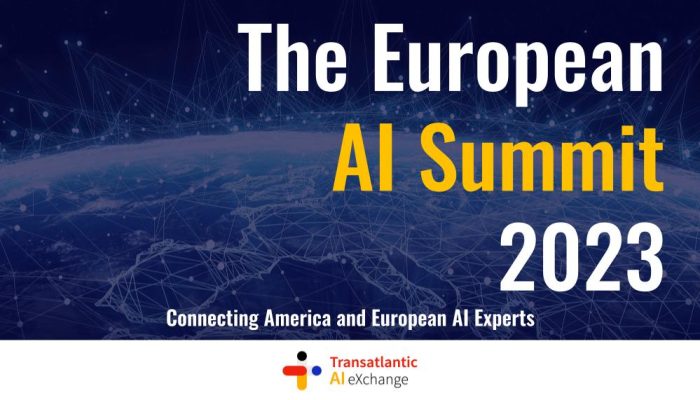